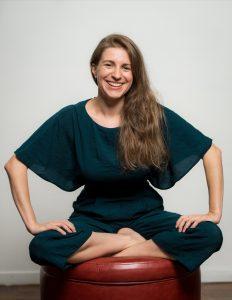 Luisa Muhr is a New-York-based interdisciplinary artist and healing arts practitioner, specializing in Family & Systemic Constellations. She is originally from Vienna (Austria), with Hungarian and Anatolian-Greek roots. As the descendant of her great-grandfather, a Holocaust survivor, Constellation work has always played an integral part in Muhr’s life.

She was first introduced to Family and Systemic Constellations more than two decades ago, through her mother and her later mentor Dr. Peter Orban, one of Germany’s most prominent Family Constellations facilitators and astrologers, who was also one of Bert Hellinger’s early students. Already as a young teenager, Muhr started to actively participate in Constellations workshops facilitated by Orban in her hometown in Austria. She eventually completed her Family & Systemic Constellations certification training with Dr. Orban and moved first to Montréal, Canada, and then to New York City, her now permanent home.

As a Constellations Practitioner Muhr has worked in healing centers across NYC and was also featured on Kimberly Ann Johnson’s renowned “Sex, Birth, Trauma” podcast. Additionally, Muhr is a certified Deep Listening® practitioner (after Pauline Oliveros by the Center For Deep Listening), combining art and healing work in a profound and fully embodied way.

Apart from her work as a healing arts practitioner Muhr is a multi- and interdisciplinary creator and performer, specializing in vocal, movement, performance, installation, and sound art, as well as experimental theater. She also runs New York’s leading interdisciplinary womxn and non-binary artists series Women Between Arts at The New School (CoPA).

Muhr deeply believes in the power of different types of energy Field Work and that healing happens through multiple shapes, forms, and lenses, the arts being one of them, Constellation work another.